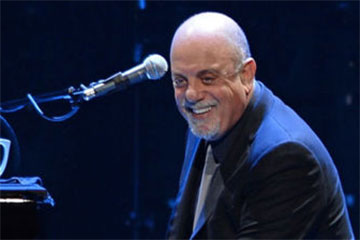 Billy Joel is performing at the Madison Square Garden in New York City on Wednesday, July 20, 2022 at 8:00 PM.

Commonly nicknamed the “Piano Man” after his first major hit and signature song of the same name as well as the similarly named 1973 album, he has led a commercially successful career as a solo artist since the 1970s, having released 12 studio albums from 1971 to 1993 as well as one studio album in 2001. He is one of the best-selling music artists of all time, as well as the seventh-best-selling recording artist and the fourth-best-selling solo artist in the United States, with over 150 million records sold worldwide. His 1985 compilation album, Greatest Hits Vol. 1 & 2, is one of the best-selling albums in the United States.