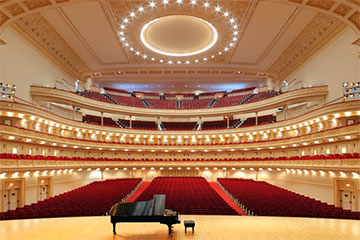 Travel to Midtown Manhattan and follow the sound of music to Carnegie Hall, one of the world’s most prestigious music venues.

Designed by William Tuthill and built by Andrew Carnegie, this famous venue opened its doors in April 1891. Soon, many great legends were taking the stage, such as Billie Holiday, Duke Ellington, and Judy Garland. The hall made history when it welcomed its first African American performer in 1892, Sissieretta Jones, and again when Mark Twain held his last lecture there in 1902.

When you step into Carnegie Hall, not only can you see your favorite performers, you’ll also take a stroll through history.

Watch a brilliant performance and enjoy the company of up to 2800 people in Carnegie Hall’s main room, the Stern Auditorium. With five levels, the auditorium’s stage has been home to many renowned classical performers, including the New York Philharmonic which played there from 1892 to 1962. Although 4 of the 5 levels can be reached by elevator, the top balcony can only be accessed after a climb up 137 stairs. You can rest assured though that the view will make every step worth it.

For a cozier atmosphere, buy tickets for a show in the Zankel Hall or Weill Recital Hall which seats 599 and 268, respectively. The Zankel Hall is popular among many performers for its unique and flexible design which allows it to be arranged in several different ways to fit their needs. The Weill Recital Hall is the smallest of the three rooms; however it is still quite impressive with its 72 seat balcony level and its 14 row orchestra.

Before or after the show, take a few minutes to check out the Rose Museum located on the second floor. The 2500 foot space provides visitors with a glimpse into the history of Carnegie Hall, including many artifacts such as century old concert programs, Beethoven’s ring, Judy Garland’s sequined jacket, and Johannes Brahms’ eyeglasses.

Make your next trip to Manhattan a memorable one with a spectacular performance at Carnegie Hall.