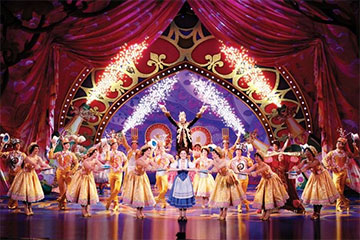 Why sleep in the “city that never sleeps” when you can catch a Broadway show instead? The Theater District in New York City comes to life at night, ready to entertain you with laughter, tears, and everything in between. From dramatic plays to thrilling musicals, Broadway is certain to have a show that you and your whole family will love.

Located on Broadway in Midtown Manhattan, the Theater District and Lincoln Center is comprised of 41 theaters, each one capable of seating a minimum of 500 people. With 1500 performances a year, Broadway is world renowned for its high level of commercial theater.

Theatrical productions in New York City date back to the 1750s when the first theater opened on Nassau Street, one block east of Broadway. Awe-inspiring performances of Shakespeare and opera ballads amazed the audiences and popularity quickly grew.

This led to the development of the Theater District, where every few years a new theater would open, competing to be even bigger and better than the last. Now, over 13 million people a year visit New York City to watch a Broadway performance.

The first longest running musical was Charles Hoyt’s A Trip to Chinatown, which took the stage for 657 performances. Since then, many well-known performers have thrilled audiences with their beautiful voices and superb acting ability. Watch classic musicals such as Cats, The Phantom of the Opera, or Fiddler on the Roof. See dancers grace the stage in productions of Cirque du Soleil, On Your Feet, or Chicago. With the musicals on Broadway, there is truly something for everyone.

Bring a pack of tissues or be prepared to laugh with one of the many wonderful plays on Broadway. Famous actors like Cate Blanchett, Richard Roxburgh and Mary-Louise Parker have inherited the stage from legendary actors like Edwin Booth, Henry Irving and Charles Fetcher. Watch your favorite performers as they pull on your heartstrings or bring you laughter in performances such as The Present, Heisenburg, Les Liaisons Dangeruses, and many others.

The directors on Broadway want your children to be entertained too and with a trip to the Theater District they will be. They can enjoy fun and exciting musicals and plays like The Lion King, Aladdin, Wicked, and Matilda, just to name a few. Not only will your children be entertained, but the experience will give them memories that will last a lifetime.

If you would rather skip the crowds or if you’re traveling with young children with early bedtimes, consider a matinee performance. Most open-ended runs offer performances during mid-afternoons on Wednesdays, Saturdays and Sundays. Make it a perfect day for the whole family with a morning on the town, a fabulous show, followed by a delicious dinner.

Whether you’re looking for great family entertainment or you’re planning a memorable date, make your way to the Theater District. Feel the excitement of watching a show on Broadway and bring lasting memories home to share.