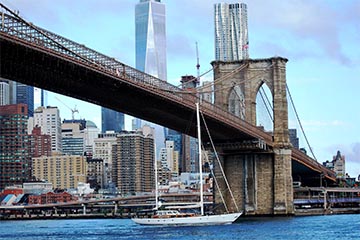 Proposals for a bridge connecting Manhattan and Brooklyn were first made in the early 19th century, which eventually led to the construction of the current span, designed by John A. Roebling. The project’s chief engineer, his son Washington Roebling, contributed further design work, assisted by the latter’s wife, Emily Warren Roebling. Construction started in 1870, with the Tammany Hall-controlled New York Bridge Company overseeing construction, although numerous controversies and the novelty of the design prolonged the project over thirteen years. Since opening, the Brooklyn Bridge has undergone several reconfigurations, having carried horse-drawn vehicles and elevated railway lines until 1950. To alleviate increasing traffic flows, additional bridges and tunnels were built across the East River. Following gradual deterioration, the Brooklyn Bridge has been renovated several times, including in the 1950s, 1980s, and 2010s.

The Brooklyn Bridge is the southernmost of the four toll-free vehicular bridges connecting Manhattan Island and Long Island, with the Manhattan Bridge, the Williamsburg Bridge, and the Queensboro Bridge to the north. Only passenger vehicles and pedestrian and bicycle traffic are permitted. A major tourist attraction since its opening, the Brooklyn Bridge has become an icon of New York City. Over the years, the bridge has been used as the location of various stunts and performances, as well as several crimes and attacks.

The Brooklyn Bridge was listed a National Historic Landmark since January 29, 1964. It was subsequently added to the National Register of Historic Places on October 15, 1966. The bridge has also been a New York City designated landmark since August 24, 1967, and was designated a National Historic Civil Engineering Landmark in 1972. In addition, it was placed on UNESCO’s list of tentative World Heritage Sites in 2017.