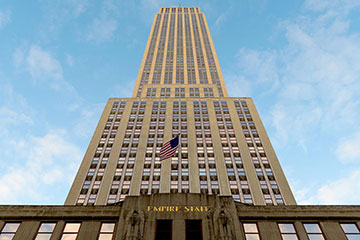 New York CityPass Deal: Save Over $135+ on Your Visit to the Empire State Building and Other Must-See NYC Attractions!

Proudly overlooking the New York metropolitan area from 1,454 feet high, the Empire State Building can be seen from as far away as New Haven, Connecticut. As one of the greatest construction marvels of all time, the skyscraper stood higher than any other building in the world for nearly 40 years. Although surpassed by the World Trade Center in 1970, this impressive building continues to captivate and amaze.

Nearly as impressive as the building itself, is that it was constructed in just 14 months, thanks to the help of 3,400 determined workers, many of whom were European immigrants and members of the Mohawk tribe. On May 1, 1931, with a push of a symbolic button in Washington DC, President Hoover ‘turned’ on the bright tower lights to signify the official opening of the Empire State Building.

The skyscraper is now home to approximately 1,000 businesses and has become a popular tourist destination for people from all over the world.

For most people, a trip to the Empire State Building is not complete until they have stood on the open-air observation deck. Located on the 86th floor, this deck has been the set for several movies, television shows and romantic proposals. With its 360 degree panoramic views you can see the Hudson River, Statue of Liberty, Times Square and Central Park. For an even more spectacular view of up to 80 miles away, you can also ride the elevator to the enclosed deck on the 102nd floor.

Your journey to the observation decks will take you through two exhibits. The first is the Sustainability Exhibit on the 2nd floor which describes the building’s eco-friendly renovations that began in 2009. Through building materials, digital displays and sculptures visitors learn how the renovations are drastically reducing energy costs and use, as well as carbon emissions.

On the 80th floor you’ll visit the Dare to Dream exhibit. This inspiring exhibit showcases the history of the Empire State Building from its planning stages to its completion. Through sketches, photographs and artifacts you’ll gain insight about the dream to build and the challenges that were overcome in the process.

With a powerful LED lighting system capable of producing 16 million colors, the the top of the Empire State Building lights up the night sky. The colors displayed are often synchronized with music broadcasts and change throughout the year to correspond with holidays and special events.

On your way down, be sure to visit the gift shop on the 80th floor. Also, consider dining at the elegant State Grill and Bar located in the stunning 3-story high lobby, or grab a cup of coffee at Starbucks before heading off to your next destination.