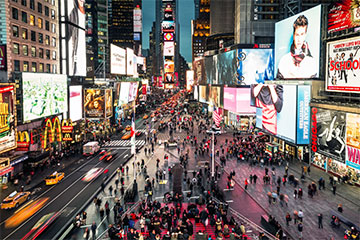 One of the first images that likely enter your mind when you think of New York City is Times Square. The visually stimulating intersection is known all over the world for its large number of brightly animated digital billboards and advertisements.

Beyond the lights, lies a wealth of entertainment from Broadway films to street performers.

Save $200+ on visiting the top NYC Attractions!

Nicknamed The Crossroads of the World, this popular intersection was once New York City’s center for horse and carriage trading. By the late 1800s the area had expanded its industries to include small theaters, cafes and restaurants. In 1904 the district was officially named Times Square. Soon after, electrified signs were installed and upscale hotels, theaters and music halls lined the streets, welcoming thousands of tourists.

When you visit Times Square, you’ll get the thrilling experience of sharing the sidewalk with approximately 350,000 other pedestrians.

Visit one of the many theaters in Time Square’s theater district to watch as famous and aspiring actors alike take the stage. Enjoy Broadway favorites like Fiddler on the Roof, Aladdin, Lion King, Chicago and many others. From classic musicals to awe-inspiring acrobatic performances, Times Square has a show for everyone.

Times Square is a shopper’s paradise. Whether you’re looking for name brand clothing, elegant attire, brilliant jewelry or car rentals, you’ll find it in Times Square. The neighborhood also has fun stores for children, such as M & M’s World, Hershey’s Time Square and the Disney Store.

With over 250 restaurants, you should have no problem finding something to satisfy your appetite. Try the famous New York City cronut or savor a dish prepared by a celebrity chef. From Brazilian, Indian, to pepperoni pizza, whatever your craving may be Time Square is sure to have it.

With the many street performers along the sidewalks of Times Square, entertainment can be free, although tips are always appreciated. Along with the unique performances of various costumed characters, you can also see the famous Naked Cowboy, who is not actually naked, but covered by briefs and a guitar. On most days you’ll find him at noon on 45th and Broadway.

In Times Square, entertainment is all around you. Enjoy an evening of laughter at LoL New York Comedy Club, sing your heart out at Pulse Karaoke or listen to smooth Jazz at the Iridium Jazz Club. If you’re an art lover, check out the excellent work of new and established artists at The Tank or the Times Square Art Center.

For a New Year’s celebration unlike any other, make your way to Times Square for the famous annual ball drop. Celebrate the end of the year and the beginning of the next alongside millions of others. Just be sure to get there early if you want a good spot.

If you want endless entertainment options, suitable for you and your whole family, then Times Square is the place to go. Exhilarating sights, sounds and attractions await you!