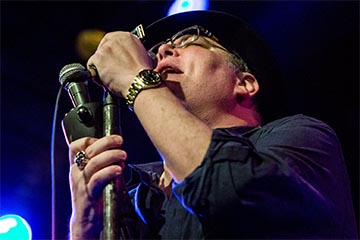 The Blues Traveler and JJ Grey & Mofro are performing at The Rooftop at Pier 17 in New York, NY on Wednesday, August 4, 2021.

Blues Traveler is an American rock band that formed in Princeton, New Jersey in 1987. The band’s music spans a variety of genres, including blues rock, psychedelic rock, folk rock, soul, and Southern rock. They are known for extensive use of segues in live performances, and were considered a key part of the re-emerging jam band scene of the 1990s, spearheading the H.O.R.D.E. touring music festival. Currently, the group comprises singer and harmonica player John Popper, guitarist Chan Kinchla, drummer Brendan Hill, bassist Tad Kinchla, and keyboardist Ben Wilson. Tad Kinchla and Ben Wilson joined the band following the death of original bassist Bobby Sheehan in 1999.

JJ Grey & Mofro is an American Southern soul-rock band from Jacksonville, Florida. The early days of Mofro can be traced back to the mid-nineties when John Higginbotham aka “JJ Grey” and Daryl Hance signed with a United Kingdom label and played shows in Europe as Mofro Magic. Grey and Hance met in their hometown of Jacksonville, Florida while working for an air conditioning company and developed a friendship through music. Their first band together was a rock band called Faith Nation followed by a funk band called Alma Zuma. The deal with the record label in London fell through, and Grey and Hance returned to their native Jacksonville and formed Mofro, then signed with Fog City Records in 2001. The name “Mofro” was coined by JJ Grey as an explanation of the sound that the band made. Grey says the word was originally a nickname that a co-worker gave him and Grey adopted it as the band name because it “sounded southern.” Grey later changed the band name to “JJ Grey & Mofro” when his grandmother asked him if he was ashamed to use his own name.