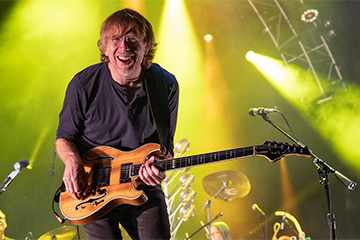 Trey Anastasio is performing at the Beacon Theatre in New York City on Tuesday and Wednesday, June 22 – 23, 2021.

Ernest Joseph “Trey” Anastasio III is an American guitarist, singer, songwriter, and composer best known as the lead vocalist of the rock band Phish, which he co-founded in 1983. He is credited by name as composer of 152 Phish original songs, 141 of them as a solo credit, in addition to 41 credits attributed to the band as a whole.

In addition to his work with Phish, Anastasio has released 11 solo albums, and been part of several side projects including the Trey Anastasio Band, Oysterhead, Ghosts of the Forest, and Surrender to the Air.