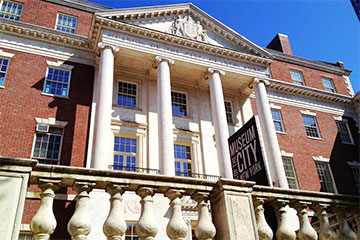 Museum of the City of New York

Located in Manhattan, the Museum of the City of New York is a history and culture museum focused on New York. The artwork and artifacts presented in the museum show the city’s evolution and transformation throughout the years. Many of the 75,000 pieces of artwork and artifacts, including the extensive collection of photographs, toys, sculptures, paintings, costumes and manuscripts, at the museum depict New York culture throughout history. The museum’s collections include a suit worn during George Washington’s Inaugural Ball, manuscripts from Eugene O’Neill, glass negatives from Jacob Riis, a chair owned by Sarah Rapelje and a vintage dollhouse with miniature pieces designed by Marcel Duchamp.

The museum is famous for its collection of photographs from notable photographers such as Percy Byron, Bernice Abbott and Stanley Kubrick. A number of the photographs displayed inside the museum were originally taken for the Federal Art Project, the visual arts component to the New Works Deal during the Great Depression. In the past, the museum displayed a photographic exhibit centered around New York’s baseball traditions. It has also featured a temporary exhibit on the theater scene in New York with tap shoes owned by Bill “Bojangles” Robinson.

The museum was started in 1923 by Henry Collins Brown, a writer of Scottish descent, as a non-profit organization. Since the start, the museum has celebrate the unique traits that make New York City different from other cities. Today, the museum is located on Fifth Avenue, near Central Park, the location for the museum since 1932. The museum was originally housed inside the Gracie Mansion.