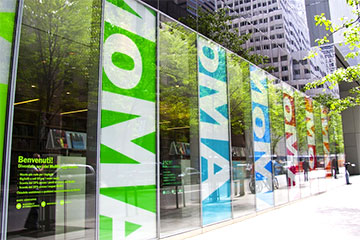 Famous artists such as Vincent van Gogh, Barnett Newman, and Claude Monet are often discussed among art enthusiasts and used as examples in art institutes throughout the world. Although millions of people admire their work, few have had the great opportunity to see it first-hand. Fortunately, at the Museum of Modern Art in New York City you can.

Founded in 1929, the Museum of Modern Art has since become one of the largest and most prominent art museums in the world, currently home to nearly 200,000 works of art.

In the museum you will find many highly esteemed pieces of art from some of the world’s most legendary artists. During your tour of the gallery, enjoy marveling at the collection of approximately 150,000 paintings and sculptures. Dating back to 1879 some of these include, Les Demoiselles d’Avignon by Pablo Picasso, The Starry Night by Vincent van Gogh and Water Lillies by Claude Monet.

While visiting the museum, step outside to take a stroll around the Abby Aldrich Rockefeller Sculpture Garden. Pose next to the 13 foot-tall steel sculpture of Sandy’s Butterfly or see the intriguing geometric-shaped human figure, Cubi X. Other sculptures in the garden include the famous Broken Obelisk by Barnett Newman, and the River by Aristide Maillol.

If you are an aspiring artist or have an interest in speaking with one, then visit the museum for Modern Mondays. Each Monday the museum hosts emerging artists, as well as those who have contributed to the fascinating evolution of film. Through their presentations you will learn how sound, production and video has changed over the years and what types of innovations are in store for the future.

It is astonishing to see how the film industry as evolved and at the Museum of Modern Art you can get a glimpse of just how far it’s come. Your walk through the history of film will allow you to view approximately 25,000 international titles including film classics, feature-length movies and a large variety of commercials. Along with the moving pictures, the museum also has 4 million film stills on display.

Opened in 1932, the museum’s department of architecture and design now has 28,000 works from famous architects such as Isamu Noguchi, Frank Lloyd Wright and Ludwig Mies van der Rohe. Along with the many drawings, photographs and architectural models, you’ll also see several manufactured objects from small to large, including a complete Bell 47D1 helicopter.

In addition to the ongoing exhibitions, the museum also hosts a variety of new and insightful exhibitions throughout the year. From creative expressions of current societal topics to adult-focused photography presentations of love, there is always something new to learn and unique perspectives to explore.

Next time you are in New York City, set aside some time to get inspired at the Museum of Modern Art. Whether you are a lover of art, architecture or film, this museum of legendary artists is a must-see destination.