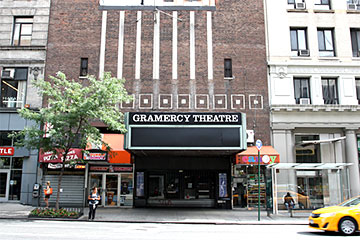 Located in New York City’s historic Gramercy neighborhood, Gramercy Theatre opened in 1937. Gramercy spent just over 60 years as a movie theatre and art-house until 1998, when it was renovated into a 499-seat playhouse to present Off Broadway theatrical productions, the largest in the city at the time. In 2004, the theater was shut down.

In 2006, Live Nation bought the space with the intention of turning it into an intimate concert venue. The first performance under Live Nation was Stellastarr on March 7, 2007. Since then, Gramercy Theatre has hosted such artists as Steve Winwood, Counting Crows, Huey Lewis & The News, The Jonas Brothers, Macy Gray, Rufus Wainwright, Brand New, The Get Up Kids, Spoon, and Jay-Z. The theater offers an ultimate rarity among the city’s mid-sized music venues: a mix of actual seating in back with general admission standing room in front, and a sound system that caters well to both.