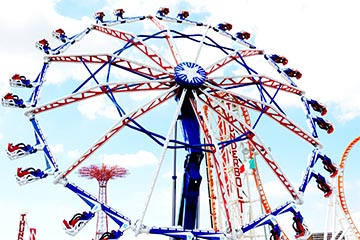 Opening in May 2010, Luna Park is the first new amusement park to be built in Coney Island in over 40 years. It features brand new rides, roller coasters, games, an Arcade, go-karts, restaurants, food stands, the historic Cyclone Roller Coaster, and the first major custom steel roller coaster in NYC – Thunderbolt.

Coney is home to the first rollercoaster which debuted in 1884, the Gravity Switchback Railway, drawing lines of trailblazing thrill seekers and setting off a craze that quickly spread around the globe.

Steeplechase Park was an amusement park in the Coney Island area of Brooklyn, New York created by George C. Tilyou which operated from 1897 to 1964. It was the first of the three original iconic large parks built on Coney Island featuring the Steeplechase ride where riders straddled horse-shaped single cars and launch simultaneously, as from a horse-race starting line.

Luna Park was an amusement park in Coney Island, Brooklyn, in New York City that opened in 1903. Luna Park was located on the north side of Surf Avenue on a site between 8th street, 12th street and Neptune Avenue. The park was mostly destroyed by a fire in 1944.

The Thunderbolt was a wooden roller coaster operating from 1925 until 1982 and remained standing until it was demolished in 2000.

The success of 1925s Thunderbolt led Jack and Irving Rosenthal to buy land at the intersection of Surf Avenue and West 10th Street for a coaster of their own. With a $100,000 investment, they hired coaster designer Vernon Keenan to design a new coaster. The Coney Island Cyclone opened on June 26, 1927, at only twenty five cents a ride.

In the summer of 2014, Luna Park in Coney Island introduced the new Thunderbolt roller coaster, an exciting custom made steel thrill ride iteration of the legendary ride that operated from 1925 until 1982.