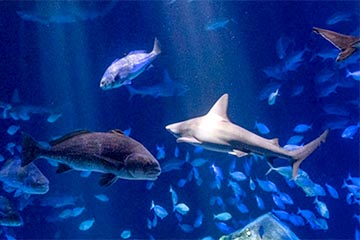 Save up to 70% on your visit to the New York Aquarium and other must-see NYC attractions!

The New York Aquarium is the oldest continually operating aquarium in the United States. It is located right off of the Riegelmann Boardwalk in Coney Island, Brooklyn, New York City and is also right next to the amusement park rides of Luna Park in Coney Island. It was founded at Castle Garden in Battery Park, Manhattan in 1896, and moved to Coney Island in 1957. The aquarium is operated by the Wildlife Conservation Society (WCS) as part of its integrated system of four zoos and one aquarium, most notably the Bronx Zoo. It is accredited by the Association of Zoos and Aquariums (AZA). As part of WCS, the aquarium’s mission is to save wildlife and wild places worldwide through science, conservation action, education, and inspiring people to value nature.

The Aquarium is home to sharks, rays, sea otters, octopus, jellyfish and more. The facility occupies 14 acres and boasts 266 species of aquatic wildlife. Its mission is to raise public awareness about issues facing the ocean and its inhabitants with special exhibits, public events and research. The New York Seascape program, based out of the aquarium, is WCS’s local conservation program designed to restore healthy populations of marine species and protect New York waters, which are vital to the area’s economic and cultural vitality.

The New York Aquarium is part of an effort to save wildlife that began 120 years ago with the creation of the New York Zoological Society, an organization founded on science and hope which has since grown to become the Wildlife Conservation Society.