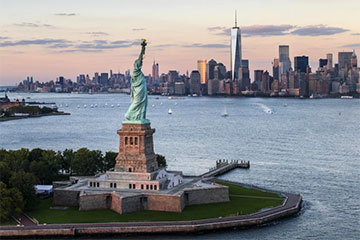 New York City is home to one of the most recognizable monuments in the world, the Statue of Liberty. With a torch in one hand, a tablet representing the Declaration of Independence in the other and broken chains at her feet, Lady Liberty is a universal symbol of freedom.

Although the Statue of Liberty is a United States monument, its history did not begin in America. Its origin dates back to 1865 in France, when French sculptor Frederic Bartholdi was inspired to build the statue in honor of American Independence. Along with the building expertise of Gustave Eiffel, the Statue of Liberty was carefully sculpted overseas and then given to America as a gift from France.

Shipped to the United States in 350 pieces, the statue was reassembled and set upon a pedestal, on what is known today as Liberty Island. Dedicated on October 28, 1886, this intricately designed copper statue towers 305 feet into the sky and has welcomed over 3 million visitors.

Statue of Liberty Tickets and Tours

The Statue of Liberty is an impressive sight to behold. Places such as Liberty Park in New Jersey and Battery Park in Manhattan offer great views of Lady Liberty, but for the most memorable experience consider taking a ferry from one of these parks to Liberty Island. Because of its many visitors, it is best to reserve your ticket in advance.

Save over 40% on Your Visit to the Statue of Liberty and other NYC Attractions!

Included in the price of the ferry, the first ticket gives you ground access. Although you will not be granted interior access, you will be able to learn the history of the island and the statue during your choice of either a park ranger tour or a self-guided audio tour. You can also explore Ellis Island, where over 12 million immigrants passed through before making America their new home.

Access to the pedestal will take you nearly 150 feet above ground where you can observe stunning views of New York, the New York Harbor and Ellis Island. You can also visit the Fort Wood outdoor deck and the Liberty Island Museum located in the lobby. The museum lets you explore the history between France and the United States, and the challenges they faced while building the Statue of Liberty.

Climb to the Crown

For one of the most rewarding experiences, make reservations to visit the crown. Because there is no elevator, all visitors to the crown must be physically capable of ascending the 377 steps to the top of the spiral staircase. Once there, you’ll quickly realize that the climb was well worth the effort. Greeted by 24 windows, you will experience a unique and unforgettable panoramic view of the New York Harbor.