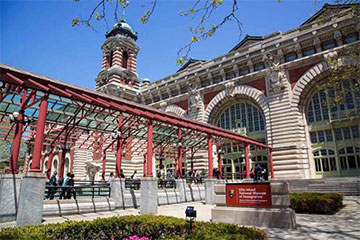 New York CityPass Deal: Save Over $135+ on Your Visit to Ellis Island and Other Must-See NYC Attractions!

Ellis Island, located in the Port of New York and New Jersey, was from 1892 until 1954 the entry point for millions of immigrants to the United States. After closing in 1954, it fell into disrepair and only after it was made a part of the Statue of Liberty National Monument in 1965 did redevelopment begin. Ellis Island opened to the public in 1976 and in 1990, the Ellis Island Immigration Museum opened. In 2001, millions of arrival records were made available.

In addition to the three theaters that are used for film and live performances, some of the exhibits you can see are Restoring a Landmark, Ellis Island Chronicles, Peak Immigration Years and The Peopling of America.

Approximately 40% of today’s U.S. citizens can trace at least one ancestor to Ellis Island. Those ancestors passed through the site mainly from southern and eastern Europe, many fleeing conflict and poverty. Journeys would typically begin on horseback or trains to the seaport. The ships they boarded were crowded, with up to 3,000 passengers and the trip across the Atlantic lasted two weeks. The first immigrant to arrive on Ellis Island, on January 1, 1892, was Annie Moore of Ireland. New York’s future mayor, Fiorello La Guardia, worked as an interpreter for the Immigration Service on the island.

A visit here is a fantastic way to gain insight into how the United States grew to what it is today and perhaps even trace your own family history. There are incredible views of the harbor and skyline and the audio tour takes you back in time to the early 20th century, setting the stage for imagining what the millions of hopeful immigrants experienced.