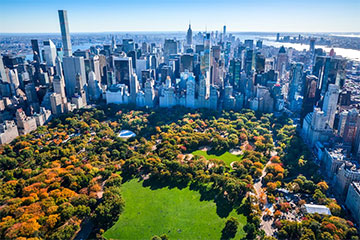 Save up to 70% at the Central Park Zoo and other must-see NYC attractions!

A hub of activity in New York City, the world famous Central Park attracts more than 25 million people each year, according to the New York City Department of Parks and Recreation. Found in the middle of the island of Manhattan, the park is a popular tourist destination, akin to Times Square and the Statue of Liberty. The park has become an iconic place, filled with horse-drawn carriages, dreamers, artists and athletes. Throughout its history, the park has been a popular spot for local residents and visitors to New York City.

Central Park offers a wide range of things to see for people of all ages. It is best known for its carousel, which has been housed in the park since 1871. The visually-stimulating park also features a zoo with a polar bear exhibit, “Alice in Wonderland” and William Shakespeare statues, a memorial to Beatles singer John Lennon, a fort from 1812, a conservatory, fountains, historic lakes, arches, man-made waterfalls, a central terrace, a pond, a ravine, a well-known bridge made of iron and wood and a world-famous ice-skating rink. The oldest piece found in Central Park, the Obelisk was designed in 1450 B.C. in Egypt.

People with a range of interests can find something to do at Central Park. For kids, the parks offers 21 playgrounds, many of which are handicap accessible. Athletes and outdoors enthusiasts can enjoy the park’s baseball fields, outdoor swimming pool, basketball courts, volleyball courts, soccer fields, tennis courts, fishing ponds, kayaking and boating areas and horseback riding and bicycle trails. For pet owners, the park offers special off-leash areas where they can take their dogs.

A National Historic Landmark, Central Park became the first landscaped park in the United States in the mid 19th century. With the growth of New York in the early 1800s, wealthy individuals from Paris and London wanted a park similar to those in Europe. After much debate about the park, the City of New York acquired over 750 acres of land for the project. Architects Frederick Law Olmstead and Calvert Vaux came up with the design for the park. A number of pig farmers and gardeners were forced to leave their homes permanently to make room for Central Park. The park ended up growing to an 843-acre space over the years. Throughout its history, Central Park has undergone a number of restorations to keep structures within the park intact.